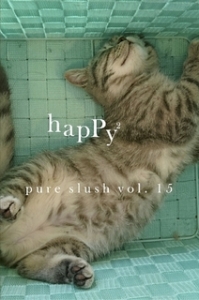 return to Happy² in the Store

from The Professor and the Eggplant by Thomas M. McDade

I’m Northern. I’m white. / The sum of all my sensibilities is their refusal / to let me go.

from Mexico Happy by John Grey

from Scales by KR Rosman

Right now you’re tethered in this moment, and it’s something to lie here and know peace, perhaps even happiness; to feel the sun like strong hands on your face.

from Kite by Andrew Grenfell

With her legs crossed, and flicking the toe of the gold-colored pump on the foot of the top leg, the entire lower half of Marge’s body was kept in constant motion by the foot’s movement.

from Marge by Steven Carr

“Her emerald eyes were bright as any star.” He licked his lips.

from Bliss of Contentment by Tom Fegan

from Surf’s Up by Martin Christmas

I thought we would all be living on Mars / by now, communicating with so many / different civilizations

from Make a Wish by Kindra McDonald

We fall to the plush orange carpet but we bump our heads together then rub them. It’s like chimps imitating one another.

from Happiness by Kyle Hemmings

She has him take off his trousers and lie down on the couch in his tighty-whities. She edges up close, with a little hip wiggle and shoulder roll

from Geisha by Robert Scotellaro

“You mustn’t,” said the lady. “You don’t have much energy.” She put her hands on his arms to keep him from getting up. “Lie down.”

from Morning Story by Scott Hughes

I have been talking for ten minutes, going over and over the same territory with him, rocketing from tears back to silence.

from Waiting by Michael Webb

Well, that’s a bunch of bull-hooey and I told him so. But he’d already told all the kids in our class that I was really a Martian.

from I’m My Own Hero by Walter Giersbach

from A Question of Partnership by Alex Robertson

But then, I think Romanticism / Is greatly misunderstood, / By the rain-sodden English especially, / Who have forgotten the bayonets / And cannonades of Revolution

from Bath by Edward Reilly

Another hotel room. This one was going for mid-century modern but missed vintage altogether and came off looking cheap and used.

from Seventeen by Jill Kiesow

He was 93 when he died and relived the war like he was ready to do battle at any moment.

from Eulogy by Melisa Quigley

A Broadway show tune, one of those up-tempo happy numbers she always loves, blares out of the café’s speakers. He hates those songs.

from Happy Numbers by DS Levy

from Of Love and Loneliness by Cynthia Leslie-Bole

A precursor squall looms / For the next tropical wet mass / But for now, it’s just hoof prints

from Long beat by Piet Nieuwland

Sometimes, in summer, your busy life settles overnight, and you can taste the dust in the air that blows in through the window screen.

from Alchemy of Dust by Linda Kohler

She grinned and lifted a plastic wallet from her handbag. “See this?” she said. “This is Molly. She was sixteen there. At her deb.”

from Taking Some Sun by Hannah van Didden

I so hated the way people in this region repeated whole sentences back to me.

A swishing sound passed her head and something smacked into her stomach. She stirred, unsure where she was and what was happening.

from Summer Daze by Meryl Baer

You said, “Lots of kids have divorced parents, but most of them seem happy enough.”

from Happy Enough by Len Kuntz

May the shelved chapbooks beckon / in whispered voices to sit and read.

from Good Wishes by Kersten Christianson

Remind me to book a room at the Hyatt tomorrow. I want to see if he can put a happy smile on my face.

from First Date by Peter Lingard

He could understand everything and wanted to kiss Bernie for her kind words.

When you see me the next time, let’s do the dance. Let’s see what changes right after that.

If the Mardi Gras website / had not contained an error, / we would have never gone to Madisonville