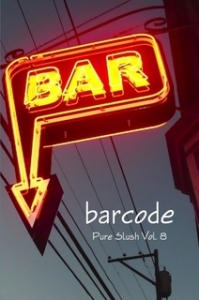 return to Barcode in the Store

Not every night but almost every night, when I shuffle off to the john to commune with James and take a leak, there’s a message on the bathroom wall for me.

The Man Who Can’t be Moved – Christopher Allen

“Oh, the man asks the woman to dance from across the room by raising his eyebrows or with a nod of his head, and she accepts with a small nod of her own.”

A whole barroom was laid out in there. And not coiled around a tree root like it was laid out by some rodent: a proper long bar with beams and struts.

I never knew anyone could smoke so many cigarettes and still have the ability to play piano like he did. Maybe cancer doesn’t affect the hands.

One Night at Harry’s – Alun Williams

A hundred couples are gyrating to a dance band off in the distance. The musicians are either dressed as snowmen or wearing white tuxedos.

A Man Walks into a Barcode – Norman Conquest

Green beer sloshes out of my mug and onto the floor. St. Patrick’s Day in an Irish bar comes with hazards, and Lucky here is the least of them.

She turned around and saw him, whoever the fuck he was. He was tall and skinny in a black t-shirt and blue jeans. He had curly brown hair and a wicked smile.

Before she died, my mother made me promise to kill the man who had taken the life of my father. That woman, that Rita, she said, got what she deserved.

Scanning the bar again, just to make sure, he breathes out and says without looking at Stan-stan, “Can I have a Heineken? And have you seen Jason? He’s supposed to meet me here.”

Madeline started going to The Tam because it was cheap, and because it reminded her of Manny’s Tam O’Shanter, where she first ate quail in a dress too informal for junior prom.

On TV a new round is starting. The Hispanic guy’s got his elbows tucked against his ribs. He takes to sharp jabs that snap his head back.

We’re not impressed. There’s a bar where drinks are named for novelists and another where they’re “inspired” by Pantone colors. But there’s a line to get in …

One More Round – Diana J. Wynne

“He’s your co-worker. You like him, you think he likes you but he’s too shy or scared to make a move outside his little Guy Sanctuary. Maybe he’s afraid of a sexual harassment suit.”

She unfolded her legs under the stool; pushed her shoulders back, crossed her arms against her body. “So why are you the drummer? Are you moody? Can you not be trusted with a microphone?”

“Oh, I hope you don’t mind taking off your shoes. We feel that the sound of heels disturbs the atmosphere,” she says. Her dark, soft voice matches the slight rustle of her dress. She smiles.

The girls slink toward the exit, the severed jukebox cord dragging from Larceny’s pant leg like a tail.

A short, round-shouldered man with graying hair and steel-rimmed glasses, Charlie was used to being overlooked on bar stools. Once seated, he vanished like a sapling among redwood trees.

Last Call at the Do Drop Inn – Arthur Carey

You wake up in the morning to a voicemail that changes your life forever. Or beside someone you’ll have to remember, because the doctor visits have become a lifetime commitment to staying alive.

I thought I saw seven empty glasses on the bar in front of me. And I pressed the eighth to my lips. That might have been why I bought drinks for the girl sitting next to me.

There were a few interactions with random strangers who sat on the next stool. Small talk mostly, followed by abrupt turn-downs.

“You speak English?” she asked. “Ya,” he said, with an accent quite a bit more pronounced than normal. It was that time of the year, play it up for the tourists.

She chuckles breathy, sending up plumes of sweet and sour air. “Come on,” she says, “Nobody’s got it all good.”

My regulars are the working stiffs: the UPS drivers, the plumbers, the painting contractors and the construction guys who want a quick one before going home. If there’s one thing I’ve learned, it’s that people are full of surprises.

While he never acknowledged any needs, he certainly had lots of wants. Since his biggest want was probably a death wish, he should have been glad his wish was unfulfilled so far.

The Sobriety Group met at four every Wednesday night, just in time for the seven members to get a good table at Patrick’s bar to drink beer by six.

And he’s there too. Behind the bar. Pouring drinks. One after another. Sometimes they speak. But mostly she orders. He pours. And so it goes.

These were words said at the end of shows by some of her favorite news anchors. She’s been sitting at a bar where some of the biggest newsmen have sat before.

“But your idea was a bit crap really, wasn’t it?” Peter says. “I mean, a cake shop in the middle of Berlin?” “Yeah,” I add, “slap bang in the middle of a nation of people obsessed with cake.”

So when Martha called the ex-biker and warrior love-maker, she kept hearing, “This number is no longer in service.” But she didn’t give up hope. After all, she got laid, didn’t she?

I down the rest of my wine. “It’s my round though,” I say as I make a mock show of reaching for my purse.

The Life of a Pretty Girl – Jennifer Chardon