115 writers take on the vagaries of friendship … 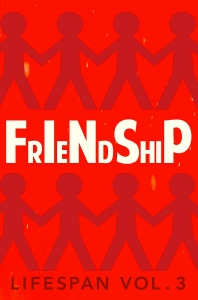 *ePubs can be read on Apple devices, and all eReaders except Kindle

to return to Friendship in the Store, click here

Over the next two weeks, recess became my study hall. I was the keen observer, hunting for clues. How, exactly, did these girls talk? What did they say? from Popular Material by Diane Gottlieb

You: curious, top of the class / First in the race, first in the line. from First place by Tamiko Dooley

Heads wave and flutter, like / rushes in a healthy wind. Multiple / parallel conversations in session, from Afternoon Tea at the Gresham by Peter Clarke

I swig from my beer and look at Kate, laughing with our friends across the table. from Tying Up Loose Ends by Emma Robertson

When I met him at a party two days after he was released, he was bleak. He described the events of the last weeks as like living through a Kafka novel. from Dark Star by Martin Phillips

You taught me to endure with humour, / to value myself when others couldn’t. from Enduring Friendship by Amalia Fish

We carry on where we left off; / strange bending of time, / where we are twenty-four again– from Comeback by Virginia Betts

Listen to the tapes. Listen to them in order, first one couple then the other. Sometimes a cassette is broken and there is a strange sense of loss, as if something almost tangible has been taken away. from Hearing Voices by Harvey Silverman

‘Anna left a present for you,’ she said, handing me a parcel crudely wrapped in crinkled brown paper. from Anna and Me, BFFAE by Yvonne Clarke

It’s strange that I know all these folks by their first names. It seems so informal, like we know each other well. from Ballad of a Barista by Cynthia Leslie-Bole

“A dog’s instinct is to clamp down, not let go. Because of the adrenaline pumping through your veins, you won’t feel a thing.” from Skipper Attacks the Man of Nature by Michael Gigandet

I was yelling for you to run, / but you had to save her, / a woman trying to take our lives from Fifty Cal by Tony Daly

No, I don’t believe I’ve ever / forgotten a single friend. / Even the ones who fucked me over. from What Things Mean by S J Mannion

Maybe she wasn’t who she said…in a small town, word gets out…but the reggae music calmed me. An axe murderer would not listen to reggae. from Dinosaurs by Heather Sager

“When are the deers coming?” he asked. “I’ve been silent for ages. When are they coming?” from Seven or Twelve by Fiona M. Jones

And yet, almost 60 years later, I remember / how fervently her plump mother waved goodbye / as Sally boarded the bus each day, from Without by B. Fulton Jennes

On the Catholic school train, girls aren’t allowed in the boys’ carriage – and vice versa – because they will corrupt each other. from Free to Roam by Alex Reece Abbott

That part of the bargain I knew he could fulfill. / If he ever found a job. If he ever saved enough / to get back here. from Goodbye Carl by John Grey

When I woke up, my friend / was dressed in traditional Navajo / dress, and he had a bow and arrow pointed at me. from On the Reservation by Mark Hudson

Next thing I knew, I had dialed his phone number. “Mr. François DeBois? My porcelain sink. I need to talk with you about it.” from Betrayalship, Trustship, Shrinkship, Friendship by Mary L. Tabor

We loaded the soapbox cart into the back and Roy drove off with us two sat in the front on the oily seats. from Soapbox Derby by GP Hyde

“He hurt us, he hurt us all,” she whispers. / “Me, Jenny, Lucy. I see our bruises, / Feel the pain, the fear as if it were yesterday.” from Sarah by Amanda Toczek McPeake

Crumbs scattered across faces, / Smiles dawning with each chomp. from Biscuits by Dave Clark

He was dyslexic and reading was not easy for him. But he loved that field guide, that’s for sure, and kept it with him all the time. from Finally Finding Thoreau by James Bates

I was the smelly kid who was sad and unkempt. from Walk on by by Steven Dee Kish

The two of us shared a small box of mini pads and a secret that only we knew. from Blood Sisters by M Senter

The number changes—the countdown to 10:30 pm is an ever-present ghost haunting this conversation. Our time is limited. I have work tomorrow at 8:30 am. from Late Night Chats by Melissa E. Wong

Parents perch / on striped beach chairs, / languid after sandwiches, / beer in brown bags. from Like Apples by Tina Barry