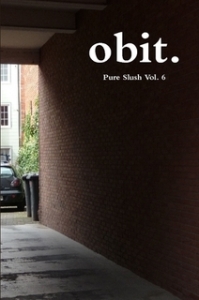 return to Obit. in the Store

22 writers feature in obit. … and below is a taste of all their 32 stories … so experience them now!

Ned the boss told me yesterday that ol’ Webster Murphy Allen is coming back to town in a pine box and we got the pleasure of stuffin’ him in the ground.

The Man Webster Murphy Allen Owes Everything To – Jaylee Alde

Web recognized that tone, the hectoring, whiny, “you’re so dumb” tone. Even his kids used it …

I never cared much for calls that come after I’ve gone to bed. Couldn’t be nothing but bad news.

I shook my head and though I try to avoid melodramatic gestures during working hours, put my head in my hands and stared at the grain on my desk. “It doesn’t make any sense, Web.”

On the train to the City, she realized that since it is over, it must be her turn to talk.

One afternoon in the fall of ’51, as I was enjoying a cheeseburger and coffee at Charlie’s Kitchen, a strange man approached and sat down across from me at my table.

“My country,” she said, “is full of people who believe in nothing, but they don’t feel good about it,” …

Our Countries are Nothing but Melting Villages – Kyle Hemmings

Though both had emigrated to America as children Maddy hadn’t come from London’s wealthy Grosvenor Square with her family, she’d come alone from Ireland, poor as stale toast …

Can you imagine reading to a little girl like me The Iliad in Latin? We did that for fun all one summer.

But our years together started one night in the Fall of 1954 when I was walking along 9th Avenue in New York, and I stopped as usual to look into Albright’s huge front window.

“You don’t think that with all the people who were going to handle Mr Allen on the way, she’d have let him go with that kind of money through his cock, do you?”

When have a man’s image towards the outside world and the reality ever been so disparate?

I regret giving Esther season tickets. I didn’t think she’d drag me along every goddamn time.

Papers blew around, and fire trucks, and police cars, and noise, and chaos, and then he saw it, the gaping hole in the building pouring smoke.

O.K. so here you can say it cannot be, and let’s call the loony bin. Fine. I don’t care. I only report what happened.

The Products of Love – Andrew Stancek

The doctor withdrew a small leather bound notebook from his jacket. He tore off the top page and leaned forward, pushing it across the desk. “This woman. And her child, who will be born in the fall …”

Who You Want to Be – Michael Webb

Webster walked right past him without a look or a hello. Was this his way of grieving? Sam wondered.

A trick of acoustics allowed someone sitting in the bathroom without the water running to be able to hear conversations from the living room at the bottom of the stairs.

Even if all the postcards had reached him at the same time – an information dump. So like him – all or nothing.

That Trouble with Robert – Mira Desai

A tree branch rattles one of the upstairs windowpanes. Who will trim it back now?

He is terribly naive and idealistic even though perhaps his intentions are well meant.

Or if I was born into his new family instead of his old one.

It was a few hours before the mourners would arrive, and the casket wasn’t in place.