110 writers write about the coalface … 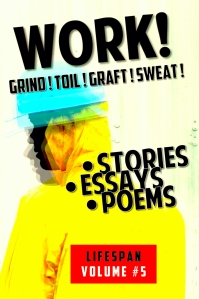 to return to Work in the Store, click here

When I worked at Einstein Bagels as a baker, / I had a boss who always said, “Mark, you scare me.” from Ethan and Casey by Mark Hudson

I like to be prepared, of course, trading my pre-law major / at Utah State, Lord knows what I was thinking back then from Millennial Cowgirl by VA Smith

My therapist wears workmen gloves, rubbed faint at the thumb and forefinger. from Folsom by Len Kuntz

“So, Jenni with an i, I have an important question.” / Jenni eyed me suspiciously a moment, crossed her arms, and waited. from Jenni with an i by Jack Henry

A pleasant voice, local accent, and he’s telling one of the old ladies he’ll do his best to get her numbers out of the machine first. It’s a standing joke, apparently. from The Caller by Jan McCarthy

I’m from upstate New York. I know something / about shoveling snow. from Shoveling with the Librarians by Jim LaVilla-Havelin

What’m I ’sposed to do with this? he said. It’s a banana, I said. Was a banana, he said. from So There He Was by Mike Lewis-Beck

She’s over that fruitless, soul-eating condition by a decade or so. from Hanging Out by JA Rose

I told them I understood. I was just happy where I was and was glad that they liked my work. from The Shmata by Kenneth M. Kapp

First night back at camp, / folded work clothes / neatly stored into the cupboard. from FIFO Worker by Rob McKinnon

I’ve been in this job since I turned sixteen and was ‘allowed’ to by law. from No more, no by Roy Duffield

Like a once high-priced call girl working The Plaza, I now worked 34th street. from Cinderella’s Last Stand by Stephanie Satie

Her hands / hold fire. The metal she burns glows white. from Lumber and Steel by David Milley

Next table over has about five retirees packin up their leftovers. Retirees do that, they’re frugal. from Burger Day by Elaine Barnard

The boss has warned that some changes are imminent, blames it on the pandemic. from Dutch Courage by Yvonne Clarke

It was a fine day so the man decided to walk all the way to work. The fresh air would do him a world of good. from The Man and the Lion by Edward O’Dwyer

To be honest, / I also wasn’t very good at my job. from My Failed Career as a Circus Clown by John Johnson

You will get this done, / even if you’re lost in a city unravelling from Leaflet Delivering for Beginners by Christian Ward

I know it’ll make it nicer to sit out, and maybe even kick a ball with the kids, but talk about fucking timing. from Home by Terry Holland

Stevie had led me into the shed where they kept an ancient, faded orange, Allis-Chalmer’s tractor. from Manure by James Bates

Make you second guess every / meal ticket you’ve read. from Do No Harm by Lisa Reynolds

I know this is short notice, but you see, up till now, we’ve made our own batteries. from Bulk Discount by Don Magin