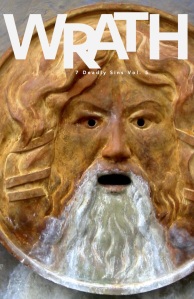 return to Wrath 7 Deadly Sins Vol. 5 in the Store

“It doesn’t help. But it makes them happy that I drink. So I drink.” / from Bang and Blame by Michael Webb

“I see you at every weird party I go to” / at which I blinked, smiled. / from Greek Coffee by Ed Ruzicka

He’d been staying with a much older, and divorced, woman. She kicked him out after he punched a hole in her wall during an argument over some chipped chinaware. / from The Sánchez Family Tragedies Part V by Guilie Castillo Oriard

Amanda doesn’t have the fortitude / to reply. Yeah, right. For now. / from The Pompous Twit Wrote: by Karla Linn Merrifield

When we round my corner, the animal is still flashing. / The French women laugh loudly, point. “Oo la la! Exhibitionist! / from A Night with Cerberus, 1982 by Pegi Deitz O’Shea

Jane, who went to riding lessons every Saturday, said she had once seen a stallion ‘cover’ a mare, and he had used his teeth. / from Horseplay by Patience Mackarness

I don’t know what she said back but I responded / “To. Your. Room!” / from (Potato) Wrath by Shane Guthrie

Then she realises why. Of course. The perfect place to break it up. / from Circular Quay by Andrew Grenfell

After some minutes Victoria’s voice, softer, called him. The softness decided him despite his knowledge that when Victoria was being overly sweet a threat hung in the air. / from Victoria’s Bath by Larry Lefkowitz

“Are you asking for a subjective aesthetic evaluation, or a general assessment?” / from Waking the Devil by Salvatore DiFalco

It was instead on closer look, a big fat greyish tongue, sweaty fresh, lying in the morning sun. / from The next thing that I saw by Piet Nieuwland

“Such a cliché. Everything Eddie has ever done has been done a thousand times before.” / from Without Compass by Cynthia Leslie-Bole

“There’s a lot of that nowadays. They don’t do books. Prefer their PlayStations.” Brenda clicks her tongue. “Not like our day.” / from H-O-M-E by Alex Reece Abbott

But this was going to be a long journey, and any seat was better than sitting on the floor or standing in the corridors. / from Personal Column by Grahame Maclean

The Tuesday train came down the hill fast, slicing through the dense morning fog like a knife cutting the curd. / from The Tuesday Train by Peter Michal

The seven little twerps use every prank in their arsenal in an attempt to rattle Maria and send her back to the Abbey a quivering mess. / from How do you solve a problem like the patriarchy by Flora Gaugg

I checked in with Eloise. She seemed snappish this morning like she’d stayed up late watching TV. / from Sub by Elaine Barnard

“Because you decided to order pizza rather than cook / dinner,” he said chortling at my question / from Unwelcome Visitor by Rick Blum

Lack of self-control, beyond any genetic factors, leads to porcine practices. And that fat leads to diabetes. / from New Delights Every Day by Jeffrey Weisman

The tape was grey, the same grey as his eyes. He watched me. I cut a piece of tape with the knife. / from The Way People Do When They’re Falling Asleep by Nod Ghosh

Then an inner voice yelled,  / ‘Do it now!  / Don’t put it off till after lunch.’ / from Chain Saw Massacre by Martin Christmas

At night he hears them knock against siding, / kamikaze windows, and plunk the gutters. / from Leavenworth Penitentiary by Jemshed Khan

Concerned by the brutal death stares and possible presence of damning CCTV, I grab something pink and flee for the nearest aisle. / from Hell Hath No Fury Like the Hangry / by Jo Hocking