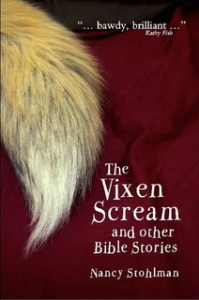 There were a cluster of ladies in chairs by the front door wearing their best sweaters, watching us. The fake fire burned in the empty living room. My Boyfriend Lives in an Old Folks Home

All those nights of illusion it was bound to happen—a slip of the knife and the trick would be for real. The Magician’s Assistant

She rolled her eyes and avoided my gaze, slammed a bright blue drink and muttered something about I’m not from here. The Mermaid

I tried to explain that I won’t have the money to get you out until my next paycheck, but the pawnshop owner said that I was just riling up the merchandise. I Pawned My Boyfriend for $85

I avoided eye contact with all the gypsies, beating deflated pillowcases against rocks as I crawled up the muddy banks and caught the tail of the story. Exodus

In Arab folklore, the fox is said to feign death by filling its abdomen with air in order to appear bloated and wait for prey. The Fox and the Salamander

Do I get three wishes? I asked. I suppose, she said. Or what about a violin sonata? I know everything by Debussy. The Genie

The next morning after my boyfriend had left, the homunculus climbed up the mattress and found me on the pillows. Let’s run away, I suggested. The Homunculus

My first instinct was to toss it into the dumpster but I had doubts—what if it landed on its head? I Found Your Voodoo Doll on the Dance Floor After Last Call

… my apartment was full of bodies and faces I hadn’t thought about in years. “Yeah,” one said, “I wasn’t going to come but then I heard you lived next to the Lightrail.” The Lightrail

The jeweler pulled out a velvet cushion and examined it with a pair of magnifying glasses. It’s broken, he said. Bronzed Heart

She became so obsessed with this preordained tragedy and the dreaded, empty future without him that she began to secretly collect pieces of him. The Detritus

The next week she was back, delivering wrinkle creams in white paper bags. She rang my doorbell even though I hadn’t ordered anything. I’m Being Stalked by the Avon Lady

So they took it slow, picnics in the park, trips to the zoo, the penis would sulk but then light up at the boa constrictor cage. The Introduction

But it’s 100 degrees out, my clone objected. I knew you would say that, I said, so I also strung up a hammock in the backyard. What Happened in the Library

We gathered potential weapons: steak knives, corkscrews, the emergency fire extinguisher from the men’s room. Pirates were hanging off the sides, shouting and shooting off pistols. Ruby Tuesdays

I really liked the 75th floor penthouse suite with outdoor hot tub—it had panoramic windows and coin-operated binoculars and a radio tower that blinked a warning for low-flying airplanes. My House is in the Contemporary Art Museum

He woke one morning and nuzzled his arm into the swooping curve of her waist only to find it cold, with a hardened glossy varnish that could only mean to keep him out. Requiem for piano

The next day when I got home the Manny Williams cardboard cutout was waiting in the living room with a note: They were going to throw it out. He has a bit of a horse face, don’t you think? #86 Manny Williams

But today, the sound of hammers. It would be the greatest party she had ever thrown. The Hostess

Found: Man’s Penis. Please contact me with description. He called the number. I think you might have my penis, he said. Missing: Reward

She’s wearing silver go-go boots and a little neck scarf. The shrink said acting out our fantasies was healthy. The Stewardess

But my first clue came under the Eiffel Tower of all places, symbol of romantic Paris. The Diaspora

Nobody ever thinks they want a slave. But when a girl comes up and says she wants to be your slave, you have to say yes. The Slave

My fox came every evening and touched his velvet nose to the screen. He coaxed me to the top of Jackass Hill and showed me his favorite place to dig. Fox II: The Quickening

When it’s almost too dark to see the first one appears, a lone bat flying erratically toward the receding sun. Then another. One by one the cloud thickens … Bats: A Love Story

He pats my hand. You’ve done the right thing, he says. Usually if you suspect something to be true, it is. The Private Investigator

But it got worse—after the convention he refused to pose for our Christmas card, stopped having sex completely, and moved permanently into the guest room. Moonlighting