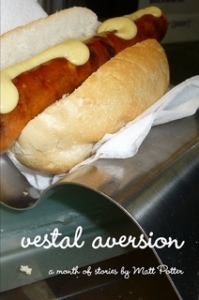 return to Vestal Aversion in the Store

31 pieces feature in Vestal Aversion … some previously published, some new … and below is a taste … bite them off and praise them high!

“I’m not the one with three ex-husbands and another on the way,” Bea added, covering the potatoes with a lid. Goose, and not turkey or duck

Even in the gloom I could see the empty glass canisters, the shelves bereft of cookbooks, the apron hanging clean but dusty behind the door. Kitchen Scrap

Odd, for at the time I was extremely yellow and not remotely haggis-like. Old haggis

She looks just like her mother, I thought, whoever the anonymous egg donor was. Bus

It would be great if next door to every restaurant, there was a 24 hour dental surgery. Bring a Book

“Next election is gonna be real interesting,” I said, wearing army fatigues as I stood in the check-out line swapping coupons for rubber sheeting. The Deepest Cut

She likes being fucked on her back mostly: she enjoys watching me do all the grunt work. Meeting Adjourned

“Well, you have a whole six months to get used to the idea,” she answered, knotting baby-blue yarn on the end of the row. First

They’re too big for my mouth. I bought them hoping I’d grow into them, alas. A smile is worth 1000 teeth

Angela Merkel can be a sweetie when she wants to be. der Morgenmuffel

“Every foreigner’s desperate for money in Berlin.” Rainbow

Sitting there in the chilly morning, wearing shorts as I am always hopeful it will turn sunny, I hoped I did not look as panicked as I tried not to feel. Brot und Käse

Often the first words we learn in new languages are swear words. Sometimes this is amusing. Sometimes it’s not. I Swear

Suddenly the world stood still and every other patron in the café bored holes into me. Lint

Mostly though, when speaking German, I love getting my tongue around the words, attempting to sound as authentic as possible. Jacqueline Bisset and Me

And now, he was stamping his mean spirit on the new year before anyone else had the chance to draw breath, lassoing the new decade with his spite and telling the world it was his to do with as he pleased. A Free Rinse

Kerryn’s hands were damp to the touch, and her eyes would dart about her freckled face and the schoolyard and the neighbourhood … Snack

“… I offered you relief from that. I expect 50% of the agreed fee. In cash.” Berniece

And it was Jürgen’s first without his two sons too, because the soon-to-be-ex was feeling … motherly / vulnerable / spiteful. (Circle your choice.) First Fish

I don’t like to say much about my life, especially when her own is unfortunate. Monthly Coffee

I suddenly saw myself in long beard and flowing tunic, dispensing wisdom and loaves and fishes. Write

“Where did you get this?” I asked, fingertips tracing the 666 on his forehead, red and bumpy. Arrivals

The crab lotion tingles and burns, stinging all senses. Body to Go

“Come in,” he says, leading me through a side door. And into a church. Which I’d noticed while waiting but thought was just a meeting point. Love

“But you’ve got all the same style there, love,” she said, waving her false nails at the blouses hanging on hooks. Arms Width

“You look tired.” She kisses me again and slips her tongue inside. Sydney Hotel Room

“Would you stop this alien bullshit, Tony! And stop saying fuck all the time!” Dishwasher

“Just call me Amber,” she said, rolling the ‘r’ – was her burr Swiss or American? We couldn’t tell … Dotting every ‘i’